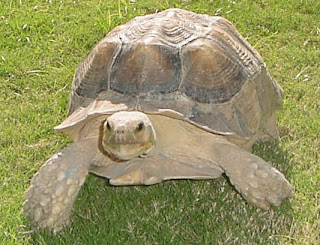 Yesterday we needed to pick up food for our pet tortise, Speedy. We have discovered that it is much more economical to buy the food at feed store than a pet store. He is large and goes through a lot of food. So, we get Mazuri Tortise Diet “tortise chow”. He is an african spurred tortise and lives outside year round. He does not hibernate in the winter so he has to have a heated dog house during the winter. In the summer he digs a hole and goes in it during the heat of the day.

One of the things that is different here is the presence of feed stores within the cities in the East Valley. A lot of them are on the outskirts but the one we went to is in the central part of Mesa. There are many people who have large lots and have horses or other livestock within the city. There are some neighborhoods that are geered to horse owners that have a central barn/corral for housing of horses within the neighborhood.

One Response to "A Trip to the Feed Store"