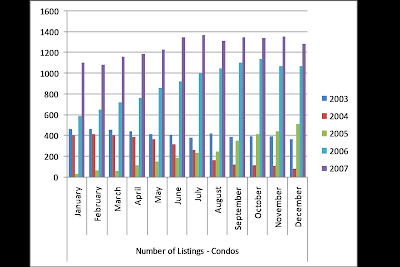 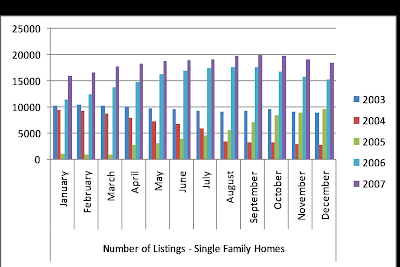 You see a lot of different statistics being quoted about the real estate market in the press. Sometimes it can be difficult to make sense of it all. So, we’ve prepared some charts for you. Today’s charts represent the number of listings each month from 2003 through 2007. These listings are those held by members of the Southeast Valley Association of REALTORS. They may include listings which these agents hold in the greater Phoenix area outside of the Southeast Valley. However, they should be fairly representative of what is happening in the Southeast Valley.

The first chart is for condos. The second chart is for single family detached homes. 2003 represents a more normal real estate market. You can see in 2004 the number of listings dropped dramatically. They then built back up again by the end of 2005 to approximately the same number as there were at the beginning of 2004. Then in 2006 and 2007 the number of listings climbed steadily with some variation for seasonal shifts.

You can get more statistics at ARMLS Statistics.

This data is supplied by the Arizona Regional Multiple Listing Service. ARMLS, West USA, and Pat & Amy Monahan do not guarantee the accuracy of the data.