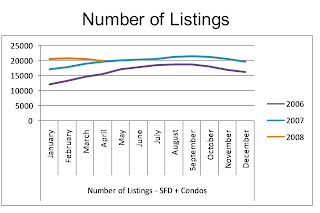 tings, you can see that in 2006 and 2007 the number of listings increased monthly from January to April. This year the number of listings has held fairly constant since January and actually decreased in April. In January there were 20575 listings of single family homes and condos combined while in April there were 19833, a 3.6% decrease. We still need to reduce inventory to get back to 2006 levels but it looks like we may be headed in the right direction.

Second – The number of sales has increased each month from January to April. In both of the two previous years, April sales decreased from March.
April sales were 1952 units a 15.6% increase over the 1689 units sold in March. 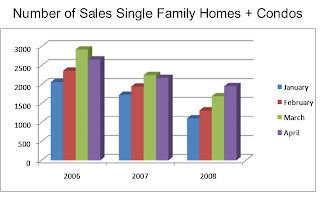 These statistics are for the homes listed or sold by members of the Southeast Valley Association of REALTORS® (SEVRAR). They will include sales of homes in the greater Phoenix area that were made by SEVRAR members. Even so, these statistics should be fairly representative of what is happening in the East Valley.
This data is supplied by the Arizona Regional Multiple Listing Service. ARMLS, West USA, and Pat & Amy Monahan do not guarantee the accuracy of the data.